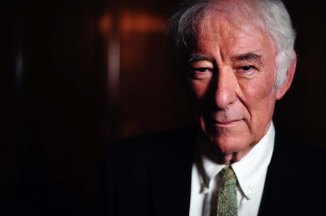 So the Irish poet and Nobel laureate Seamus Heaney has died. The songwriter Paul Simon noted correctly that Heaney “was one of those rare poets whose writing evokes music” — linking the house of songwriters with that of poets, “who are distant cousins at most, and labor under a distinctly different set of rules.”

Heaney composed a lot of his most notable work early in his career when (as is often the case with musicians) the filament of his creativity seems to have burned brightest. Consider, for instance, the poem “Digging” (1966), in which he draws a generational line from his bog-digging grandfather through his potato-digging father and onto his own well-educated, soft-handed life as a poet. The poem opens:

Between my finger and my thumb
The squat pen rests; snug as a gun.

Under my window, a clean rasping sound
When the spade sinks into gravelly ground:
My father, digging. I look down […]

The immediate reference to a gun might arouse the admiration of many of today’s more apocalyptic poets, but the quickest way to invite criticism and derision in many contemporary poetry workshops is to present such obvious rhyme schemes: slant rhyme (thumb/gun) is bad enough, but use monorhyme (sound/ground) and you’re approaching the pinnacle of current-day artistic blunders. Hey, why not just write the entire poem in iambic pentameter, for chrissakes!

The intelligent reader knows that Heaney is merely setting us up, however, using simple rhymes to evoke simple farm people — just this once, never to return — before moving on to more irregular patterns and word choices that lift the ripe, boggy soil to the reader’s nose and ears:

The cold smell of potato mould, the squelch and slap
Of soggy peat, the curt cuts of an edge
Through living roots […]

Squelch! Slap! Soggy! Curt cuts! Any songwriter or poet can relish the sonorousness of the words.

Then the poem concludes with the narrator awakening from his pastoral reverie and concluding he will have no such life:

Between my finger and my thumb
The squat pen rests.

I’ll dig with it.

Too pat of an ending!, I hear the poetry workshoppers cry. Too maudlin! But Heaney’s four majestic one-syllable words — “I’ll…dig…with…it” — conclude a closing sequence of 11 consecutive monosyllables that echo the poem’s opening slant rhymes and monorhymes, as if to say: I’m a simple man, too, just like my grandfather and father; it’s just that my implement is a little more refined.

Would the workshoppers dig it? Nope. Though Paul Simon might.

One other Seamus Heaney poem that stays especially in mind is “Mid-Term Break,” also from 1966. The narrator arrives home from college for the funeral of a four-year-old brother killed by a car. There are just a few rhymes here (two stanzas in a row end with the word “hand,” however, which border on being verboten), but again sparse and simple one-and two-syllable words conclude the poem — for what else is there to say when confronting death at such a young age?

[…] I saw him
For the first time in six weeks. Paler now,

Wearing a poppy bruise on his left temple,
He lay in the four foot box as in his cot.
No gaudy scars, the bumper knocked him clear.

A four foot box, a foot for every year.

There is an eternal tension, I know, between pushing creative boundaries and remaining accessible and understandable. My main complaint about most contemporary poetry is its outsized obsessions with the former and often bristly disregard for the latter — as if the entire art form were satisfied to remain sequestered in a collective artists’ garrot spinning doilies for the consideration and entertainment of its own knitting circle. (And maybe this is the case. It certainly can be nice and comfortable and peaceful in an artist’s garrot.)

Heaney suffered no such obscurity. In 2007 his books, as publicly understandable as they were critically respected, made up two-thirds of all sales of living poets in the UK. What does this say about other contemporary poets?

In my mind, every poet should seek their place between the twin poles of creative innovation and public accessibility. Seeking one does not necessarily compromise the other, nor does it need to obviate the other. Bringing more exposure to art and more artistry to the public forum would be, like Seamus Heaney’s poetry, music to the ears.