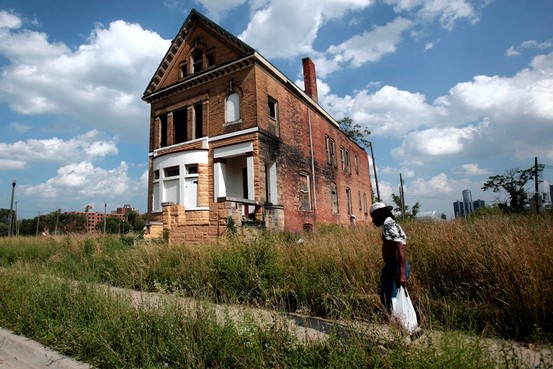 American journalism needs a big geographic consciousness-raising. And I say this on behalf of the Detroiters, Clevelanders, Buffalonians, Des Moinesians, etc., everywhere – current and former.

It would be nearly unthinkable for journalists to characterize entire ethnic groups in broad-brush terms. Yet why does there seem to be free license to refer to entire metro regions — each with their hundreds of thousands, even millions of people and their dozens and dozens of neighborhoods — using singular descriptions like down-and-out Detroit, exciting Las Vegas, dowdy Buffalo and glamorous Los Angeles?

Or even more grossly, to call entire regions the “Rust Belt,” the “Sun Belt,” the “Left Coast”?

Travel, as they say, broadens. And anyone who has done so at all knows there are downright gritty areas of LA and Miami and quite beautiful parts of Detroit, Cleveland and Buffalo.

But those are just words. Images can be even more powerful. And there has long been a body of thought that photography can conceal just as much as it communicates simply by editing out of a picture that which doesn’t neatly fit the narrative.

All this came to mind recently when the Wall Street Journal ran a story on how a house at 312 Watson St. in Detroit (photo above) has become the media’s “poster child of the city’s decay.” I don’t blame the photographer here, really. A resident of nearby Bowling Green, OH (as, once, was I), he had been dispatched to Detroit by Getty Images and found this striking dichotomy of dilapidated neighborhood housing vs. gleaming corporate aloofness (symbolized by the towers of General Motors’ headquarters on the horizon, middle right).

What a great image; I might have shot the same thing. But then the photo “appeared on the front page of newspapers and show[ed] up in prime-time TV dramas,” coming to “symbolize the abandonment that helped push this city into the country’s largest municipal bankruptcy.”

But what is driving a lot of Detroiters crazy is that the image doesn’t (surprise) tell the whole story.  As the WSJ reports:

“Across the street from 312 Watson is a carefully restored, 100-year-old home with a mansard roof owned by an emergency-room doctor. To the north, a new Whole Foods store is busy with shoppers. Several blocks south, near the Comerica Park baseball stadium, a single-family house is listed at more than $400,000.”

And sure enough, a check of Google Maps’ current street view for the house shows, if not a thriving neighborhood, then certainly that the lot around the house has been trimmed, the streets are well-paved, newer buildings are in the background and the surrounding area is potentially on the cusp of a re-urbanizing turnaround: 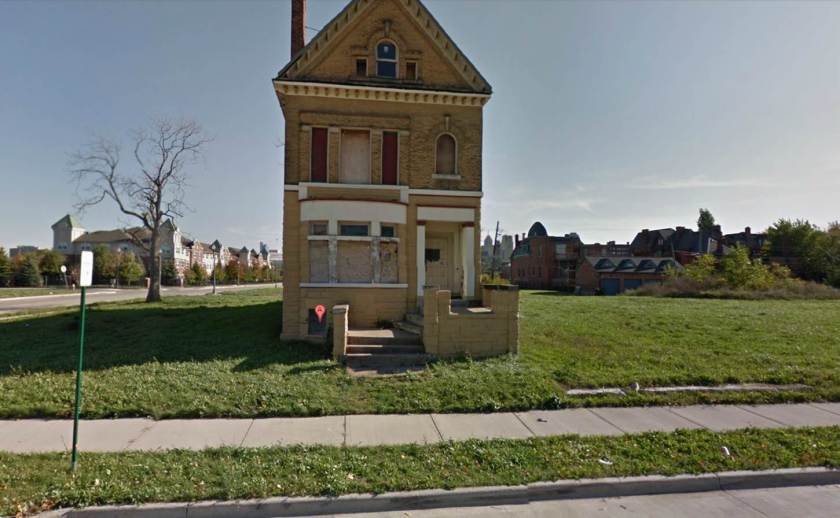 The WSJ piece concludes with a quote from a neighbor who, himself in the midst of a house restoration project three blocks away, says of the photo of 312 Watson: “It looks like it should be in a horror movie. Those of us who live here are not living in a horror movie.”

Perhaps I’m a bit more sensitive to this topic than many, being from and living still in Cleveland. A few weeks ago the Cleveland Plain Dealer ran a striking front-page photo of the city’s new Global Center for Health Innovation. Looking at the photo, I thought: Wow. This does not fit the narrative of what most Americans probably think of Cleveland:

Does it conceal as much as it conveys? I don’t think so. And not just because it paints a positive picture. As a lifelong resident I can attest that this is what the immediate area around the Center looks like and that it’s one of the most beautiful parts of Cleveland — a reserve of open space and classic architecture from the city’s glory days. Now…get in a car and drive just a mile or two from this point and you’ll see a much different Cleveland…

And that’s precisely the point. Having lived through Cleveland’s worst press (1960s) as well as its best (1990s), I have said that the city is neither as bad nor as good as you may have heard. Nor is Detroit, which is both financially stricken at its urban core and spectacularly wealthy in its distant suburbs. Nor is Las Vegas, which is “Sin City” along the Boulevard but has nagging housing and unemployment problems. Nor is Los Angeles, which is glamorous and superficial and cultured and troubled all at once.

Journalists probably know better than anyone: There’s a good and a bad to everything, places as well as people. Let’s show it.