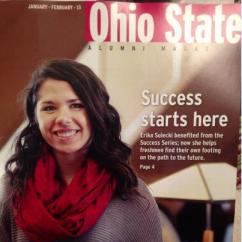 Erika on the cover of the January-February 2013 issue of the Ohio State Alumni Magazine.

I’m a proud papa to report that my daughter is pictured on the cover of the current issue of the Ohio State University Alumni Magazine. As the cover blurb describes: “Erika Sulecki benefited from the Success Series [a campus-acclimatization program for new students]; now she helps freshmen find their own footing on the path to the future.”

After the novelty and hoopla of this honor had receded, Erika, who’s a senior at OSU, got around to reading the passage of the story where she’s quoted. Then she texted me:

“Hahaha so [I] just read my quote. Is it frequent for writers to paraphrase what you say and then quote it? I feel like one of them was something I wouldn’t say directly although it[‘]s what I meant”

Ah. That odd feeling of close-but-not-quite-exact-verisimilitude that anyone who has ever been interviewed for print feels. It’s sort of like seeing yourself on video or TV for the first time. Is this what I really look like? Is that what I actually said?

Having been quoted once or twice myself through the years, I responded:

“Yes, isn’t that an odd experience? Writers frequently paraphrase what they remember you saying. Me, I’ve always tried to get the quote as verbatim as possible”

And it’s true. Maybe it’s my persnickety past as an English major studying literature, where dialogue and the way a character says something advance the plot and theme every bit as much if not more than the narrative itself.

“Haha yeah it was phrased in a way I wouldn’t say it. I mean it’s not bad [‘]cause he got [t]he gist but it was funny”

Yes, the gist — isn’t this really what we journalists are seeking to convey? But note the peculiarities and uniqueness of Erika’s texting which are so unique to Millennials. I’ve quoted her verbatim so that you might get the full “gist” of what she’s communicating.

And isn’t this what we should be doing with the spoken as well as the written word? I.e., quoting verbatim, or awfully close to it? (Taking care not to embarrass, of course.) Cadence, diction, syntax — all are emblematic and representative of the subjects we’re interviewing. Shouldn’t we seek the last full measure of accuracy in representing the thoughts, words and very sound of the people we’re capturing in our content?

The hurly-burly of an interview sometimes precludes such leisure, of course. Sometimes we simply can’t physically pause in the moment to write down precisely what the subject is saying. And God knows that going back and transcribing an interview is a pain.

But in this era of fast-encroaching electronic media, of microphones and “voice memos” right on our iPhones, of nearly omnipresent video cameras on our smartphones, of YouTube for the masses — shouldn’t we at least try? The reward is a print story that can paint in words the completeness of a person as accurately as a still photo or video would.

Millennials did not invent the Internet. Nor, for that matter, did Generation X’ers.

Yet why are so many of us in the media surprised Baby Boomers are online? Here’s just the latest bit of evidence, from eMarketer:

More consumers are filling their prescriptions online, with a surprising demographic leading that digital consumer transition — baby boomers, an age group most likely to have ongoing prescription needs.

I, for one, am not surprised. But maybe that’s because I’m a (late) Baby Boomer — one who began his career tapping out high-school sports stories on an early-model word processor at a local daily newspaper. This was all the way back in 1980-81. (By the way in those days we also used a “TC” (telecommunication) machine that basically presaged modems and email, as our beat writer for the local Major League Baseball team dispatched the text of his nightly game coverage from far-off American League outposts like Anaheim and Dallas — like magic.)

A decade or so later, we of the same generation ushered in the era of desktop publishing which essentially did for paper media what web CMS’s do today for online media.

Are Baby Boomers as uniformly acclimatized to digital devices as their younger counterparts? No. But I think a lot of unwarranted “surprises” are straight ahead about who’s using online services. Few of us, at any age, are exempt from enjoying online conveniences — and the boom in tablets and their point-and-push interfaces are going to make this truer by the day. Blanket statements about an assumed correlation between age and technology need not apply.